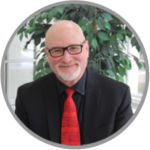 Hello! This is my story.

Jim Boratko gained a love for choral music at a very early age. As a cadet at the United States Military Academy at West Point, he sang with both the Cadet Chapel Choir and the Cadet Glee Club. With those groups, he sang at St. Thomas’ Cathedral in New York, the National Cathedral, and the Pentagon in Washington, D.C. He was very active in barbershop quartet singing, both with choruses and with a quartet, A Family Affair, the latter of which went on to compete at the International level.

He graduated as a music teacher from Central Connecticut State College, taught public school music in the Winchester Public School system, was rehearsal pianist for the Nutmeg Ballet Company, and toured professionally with the top 40 band, Countdown.

More recently, he is a founding member of Gaudeamus, a Grammy award winning chorus based in Torrington, CT.  With this group, he’s had the good fortune to perform at Ozawa Hall at Tangelwood, and the Cathedral of St. John the Divine in New York City with noted musicians such as Pete Seeger, the Paul Winter Consort, and Paul Halley. He’s also directed or played in numerous Broadway musical productions, including Godspell, and A Chorus Line.

Throughout his entire music life, he’s been involved with church music as an organist and choir director, at churches in Burlington, CT, Winsted, CT, and his current post, the First Church of Christ, Congregational, in West Hartford, CT. Jim brings all of these varied interests and experiences together in his approach to music, preferring to perform works in as authentic a style as possible, but with something special and unique with each performance.

Jim resides in Canton with his wife, Kathi. They have three sons: Jeffrey, Keith, and Michael.